A tree expert from Greece is helping one of the UK’s top timber companies develop new products.

Athanasias Dimitriou is the wizard of wood who is spending two years with Ruthin-based Clifford Jones Timber, the UK’s biggest producer of wooden fence posts, as they look to diversify their business.

His work with the company is part of an ongoing partnership Clifford Jones Timber have with Bangor University to develop new products.

Athanasios, 27, from Karditsa, in Thessaly, central Greece, has a Ph D in Wood Science from Bangor which he says is one of the UK’s leading universities in the field.

He is joining Clifford Jones Timber as part of the Knowledge Transfer Partnership scheme and he said: “It’s a collaboration between the company and the university to try and add value to home-grown timber.

“Growing conditions are so good here in Wales that the trees like spruce grow much more quickly than they do in Scandinavia and Canada which are much colder.

“An annual ring of growth in Wales is two centimetres while in Sweden it could be just a couple of millimetres
“That means Welsh timber is ready to cut sooner but it is more subject to stress so if we can find ways of strengthening it the wood will be more useful for the construction industry which develops new markets for Clifford Jones Timber.”

Athanasios is working on heat and chemical treatments that can make the wood more stable and more resistant to water which also means it is less liable to fungal attack.

Clifford Jones Timber chairman Richard Jones said: “We have a long history of partnership with Bangor University which is a centre of excellence for the timber industry.

“We are constantly looking at ways of being innovative so as to open up new markets and so research and development is very important to us.

“It’s brilliant to have Athanasios here with us – he brings a real scientific expertise and a new way of looking at the industry which are very exciting and which is already benefiting us.”

According to Athanasios, the timber industry in Greece has fallen on difficult times in recent years, as has much of the Greek economy, and has mainly involved hardwood for furniture and also the production of MDF.

He said: “Greece is very mountainous and the temperature extremes are much greater – it’s much colder there than here at the moment – so much of it isn’t really suitable for large scale timber production unlike Wales which has very good growing conditions.

“I am very focused on research here and as well as the heat and chemical treatments, Clifford Jones Timber has a laminating facility and I am also looking at ways of bonding the timber in different ways, using the grain in different directions, to make it stronger.”

The laminated timber produced in Ruthin goes chiefly to the leisure industry with major contracts for companies such as Center Parcs and for playgrounds and play equipment.

Laminated timber is particularly suitable for playgrounds because as well as being strong it has a smooth finish but Clifford Jones Timber would like to develop new markets in the construction industry with laminated timber that is as strong as concrete and steel but much lighter.

The company process over 100,000 tons of timber annually at Ruthin and at a plant at Gretna in Scotland and employ over 80 staff.

As well as over two and a half million fence posts a year they make laminated timber for the construction and leisure industries, gates and dried logs and almost 4,000 tons a month of residue from the wood and its bark goes to biomass.
They recently hosted an event as part of the Welsh Government’s Inside Welsh Industry programme to showcase the sustainability and innovation of their processes. 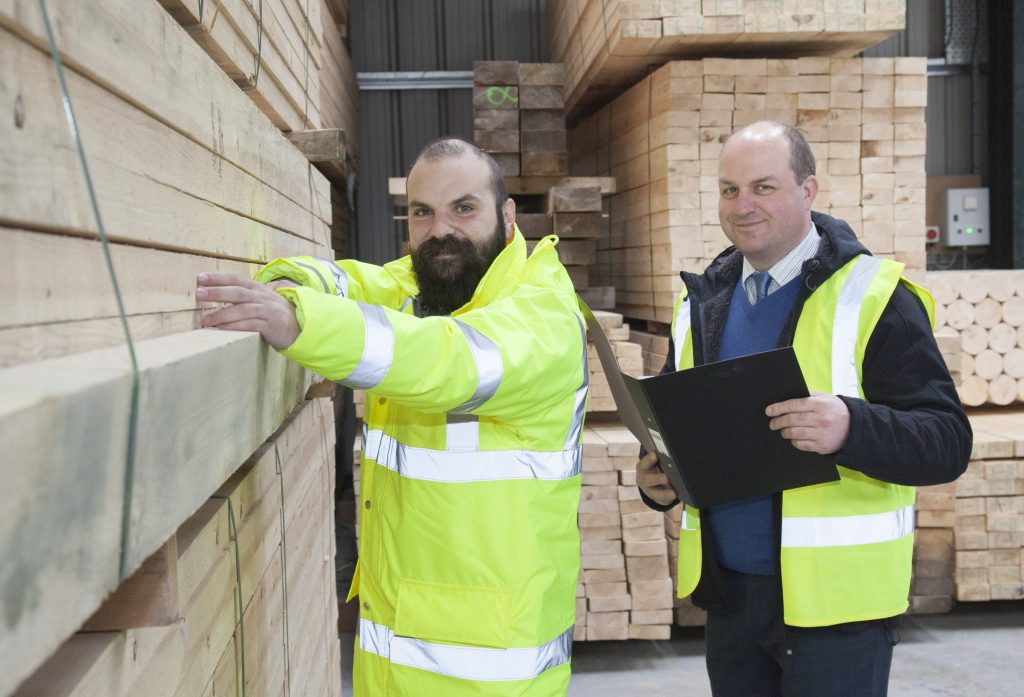 Richard Jones added: “Our business is very efficient, we maximise what we can recover from the timber we purchase, we don’t produce a ‘waste’ product, everything is utilised. Because of the shortage of home grown timber we have to make the most of everything we buy.”

Clifford Jones Timber was founded in 1948 and is now headed by Richard and commercial director Sarah Jones-Smith, his sister, the third generation of the family.

They send shipments of their fence posts as far afield as the Falkland Islands while other clients for their timber products have included Center Parcs, a luxury treehouse builder, award-winning vineyards and a deck-chair company.

Read about our company journey since being founded in 1948.